The Cartagena Protocol on Biosafety to the Convention on Biological Diversity is an international agreement which aims to ensure the safe handling, transport and use of living modified organisms (LMOs) resulting from modern biotechnology that may have adverse effects on biological diversity, taking also into account risks to human health. It was adopted on 29 January 2000 and entered into force on 11 September 2003.

On 29 January 2000, the Conference of the Parties to the Convention on Biological Diversity adopted a supplementary agreement to the Convention known as the Cartagena Protocol on Biosafety. The Protocol seeks to protect biological diversity from the potential risks posed by living modified organisms resulting from modern biotechnology. It establishes an advance informed agreement (AIA) procedure for ensuring that countries are provided with the information necessary to make informed decisions before agreeing to the import of such organisms into their territory. The Protocol contains reference to a precautionary approach and reaffirms the precaution language in Principle 15 of the Rio Declaration on Environment and Development. The Protocol also establishes a Biosafety Clearing-House to facilitate the exchange of information on living modified organisms and to assist countries in the implementation of the Protocol. 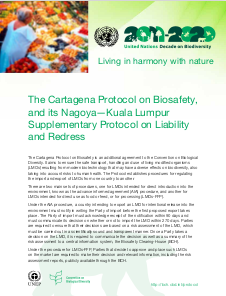